For a well established business, its brand name carries with it the weight of history, sometimes that’s a good thing, sometimes it’s bad. Sometimes people, clients and customers are unaware or indifferent, in which cases, is it something worth clinging to? A business is likely to have changed significantly since its inception, it may have grown significantly, evolved, pivoted to the point where the name it has stood for no longer represents what it stands for currently, or in the future. In such an instance, it may be worth exploring the possibilities offered by a brand new brand name, or an evolution of its current name to better represent what the contemporary company stands for.

Recently, we’ve witnessed an attempt by a well-known financial institution at brand renaming that has received a somewhat mixed reception. By dropping the vowels from their name, they’ve so far succeeded in inviting ridicule, causing confusion (surely it’s a knowingly ironic and temporary piss-take, perhaps a mistimed April fool?), and causing potentially irreparable damage to the brand (or should that read brnd?). Mind you, if nothing else, it’s got people talking. Love it or hate it, you’re sure to have an opinion on it and it put the brand firmly in the spotlight for a few weeks at least. This was something we had to be mindful of when collaborating with a client who was keen to go bold when it came to refreshing their already successful business.

From maintaining historic buildings to installing modern high-tech heating and ventilation systems, the Royston Group could call upon 60 years of heritage in building maintenance. However, their name had little cut through in the wider building services industry and they had steadily built a glowing reputation through a network of close clients and their recommendations, rather than on the strength of their brand name. Having grown from a small, New Forest-based plumbing and heating company to a multi-million pound business, they wanted a new look and feel to better represent the modern, forward-thinking business they now stood for. The Royston Group enlisted the help of The Canopy to refresh their brand with a fearlessly open-minded approach and a determination to modernise both their business and their industry.

Having spent more than half a century building their reputation, to the point where 90% of their work was the result of customer referrals, The Canopy soon hit on something the business had steadily been building over time; trust. The theme of trust was to play a key role in helping us develop their relaunch strategy. We also proposed the possibility of renaming the brand at the same time as refreshing their look, feel and strategy. This idea was received with an open mind by the Royston team, so long as the new name was synonymous with excellence, integrity and responsiveness, celebrating their proud heritage whilst remaining resolutely future-focussed.

It was clear that a forward-thinking mindset was what drove the success of the Royston Group, the ability to respect the past, whilst preserving the future. Therefore, we took the first three letters of FORward and merged them with the first two letters of THinking to create the brand name FORTH® .

This name gave us a story we could leverage, building upon the forward-thinking theme and applying that mindset to both the maintenance and preservation of historic buildings, and the implementation of heating, ventilation and plumbing in modern spaces that future-proofed them for a long period of time. We therefore hit upon the strapline ‘Preserving Futures’ as a means of acknowledging their past present and future. As FORTH®  is always keen to attract, train and retain talented staff, this strapline also acknowledged their commitment to staff training and career development. 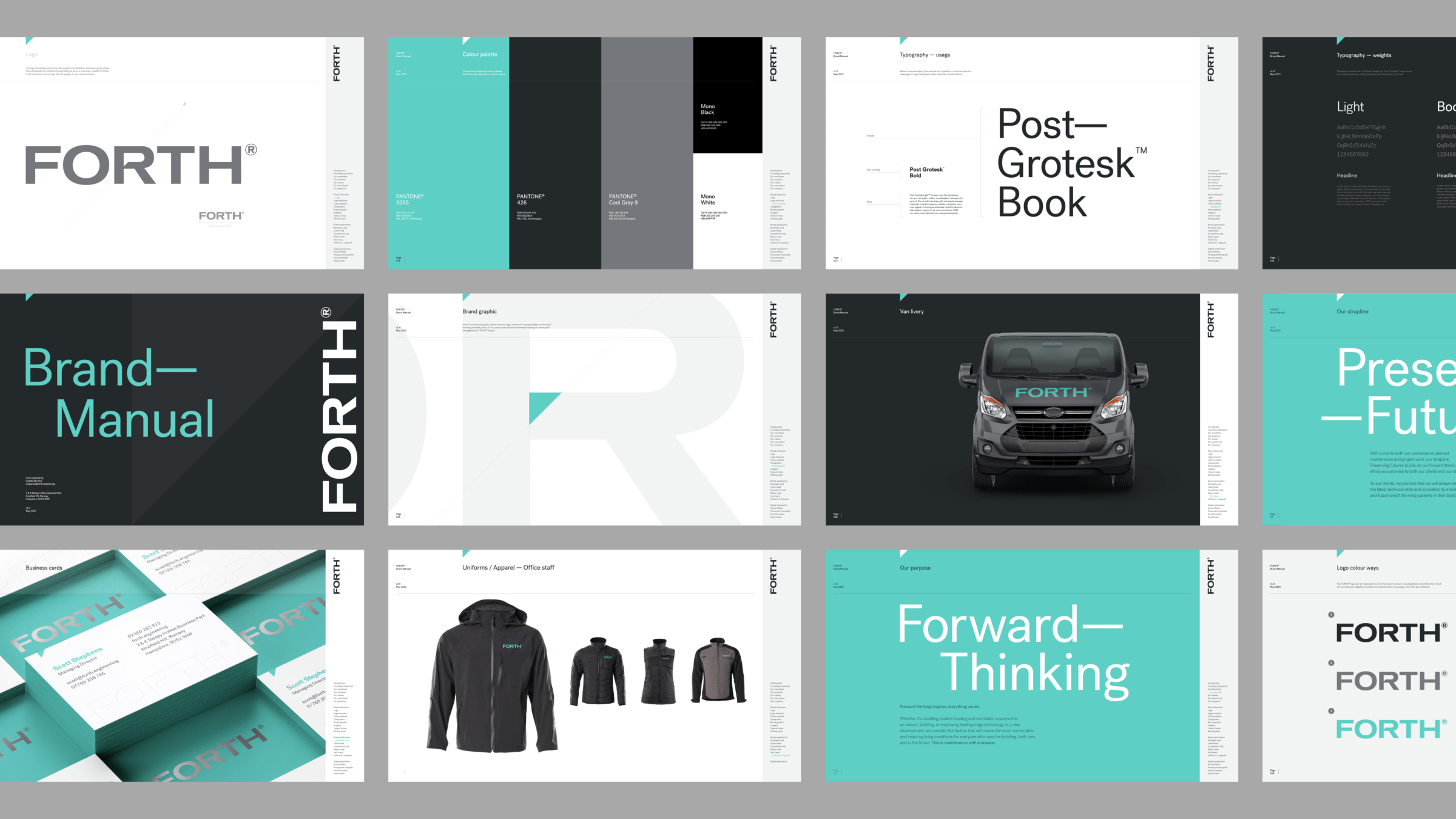 Armed with an entirely new look brand featuring a new name, a distinct colour scheme, and bold, confident tone of voice, FORTH®  was ready to relaunch with renewed vigour, and celebrated the launch of their new website in May 2021. Due to delays caused by the pandemic, this project has been almost two years in the making, but has demonstrated the continued importance of close collaboration. Throughout continually setbacks and delays, we continued to closely support FORTH® and remained in regular contact, building that sense of trust between client and agency. It helped that the business continued to be brave and showed the willingness to take risks in the face of adversity, not least by boldly opting for a new brand name rather than the safety of continuity. FORTH® is aiming not only to retain the loyal customer base that has made them so successful, but to attract new business on the strength of their beautiful new brand.

We’re truly excited to see how far FORTH® can fly.